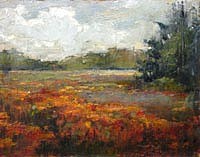 This exhibition is sponsored by The Nickelsworth. We thank them for their continued generous support of the arts in our region.

Don Ealy is a painter.  He paints in the grand tradition of the old masters, although he would laugh at the comparison.  In his painting there are no tricks, shortcuts or any pandering to the current fashions.  Landscape, still life, people flow from his brush in color, light and shadow as they did from the brushes of Rembrandt and Rubens (again his laugh), but the perceptions are uniquely from his restless eye.  With “lyf so short, the craft so longe to lerne” and more than forty years after committing himself to the life of a painter, today every Ealy canvas shows the hand of a master craftsman and the clear, calm vision of a mature artist.

As a child growing up in Spokane, Washington, Ealy sketched constantly and remarkably well. Herman Keys, noted artist and his mentor, would shake his head and sigh, “The boy draws like an angel”.  The head shaking and sighing were for other less productive practices of his pupil.

Ealy studied, painted and practiced his other practices in Los Angeles and Mendocino, California. He spent time in New York before moving on to Europe, settling in Malaga, Spain for a formative period.  Other travels in Brazil and Central America and salt water fishing ports anywhere-- Alaska, New England and Nova Scotia, the Pacific and Gulf Coasts-- have had an influence on his work as did two years of sea duty aboard an aircraft carrier in the Pacific and Far East.

Ealy’s work has been shown in the Pacific Northwest, Chicago, New York and Tokyo.  He has won prizes, been favorably reviewed, and his paintings hang in homes and offices across the United States and Japan.

Spirit Lake, Idaho with its peculiar, subtle, shifting Northern light has been Ealy’s home and studio for many years.  There, he and his wife Mary, have raised three fine sons, Michael, Gregory and Patrick.