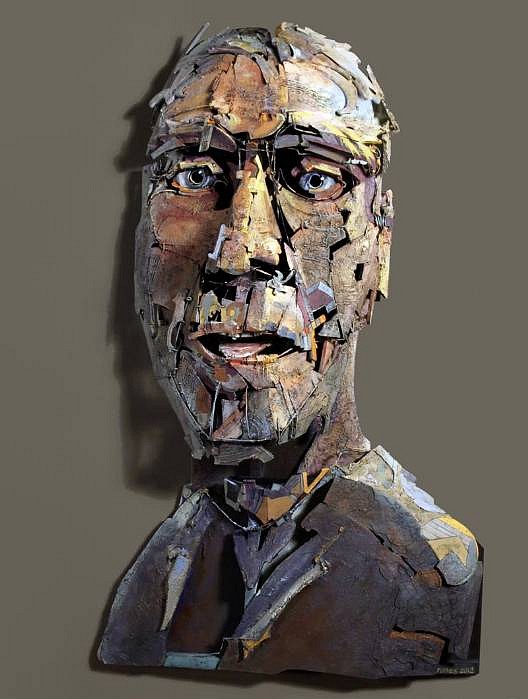 The Art Spirit Gallery is proud to open a show of incredible work by Robert Grimes. The Opening Reception and ArtWalk will be on Friday, August 9 from 5-8 pm.  Everyone is welcome.

Robert will give an informal talk and demonstration in the gallery on Saturday, August 10 starting at 1pm.

SUMMER HOURS: Open every day from 11-6 and Friday evenings until 8.

Robert Grimes’ exploration in the studio has produced a lifetime’s body of work that is at once finely crafted and conceptually driven. The artist is adept in the use of a wide variety of media; this proficiency allows him to experiment, almost scientifically, in a search for the materials and processes that will best communicate to the viewer. Grimes has made and studied fine art for the majority of his life. Since he retired from a career in jewelry design in 1998, he has been able to devote his full attention to an already thriving practice.  He has had 11 solo exhibitions and has participated in 22 group shows at the Art Spirit Gallery in the last fifteen years. Gallery owner Steve Gibbs has also worked with Grimes to display works at such institutions as the University of Montana and Whitworth University. Robert Grimes is the quintessentially prolific artist. August’s show at the Art Spirit Gallery is an opportunity to see the current results of Grimes’ intellectual, expressive, and visual investigation.

One might think that the discipline and consistency of Grimes’ exhibition record indicate a predictable or formulaic studio practice. Nothing could be farther from the truth. Grimes is a disciplined and productive artist with an incredibly strong personal style, but a study of his past and current works reveals constant growth.

In his undergraduate work at the University of Denver, Grimes’ focus was on painting. At that time, the school trained young artists to explore non-objective imagery. In contrast with that experience, Grimes’ teachers at Indiana University’s MFA program emphasized the importance of such traditional artistic ideals as faithful representation of the natural world and correct depiction of anatomy. These formal educational experiences, along with Grimes’ career in commercial design, established a strong foundation for the work that he makes today.

A tidy, yet sizeable, pile of sketchbooks sits quietly on a shelf in Grimes’ studio. He started the first one in 1981 with the intention of “re-learning how to draw.”  He began, systematically, to make what he calls “Automatic Drawings.” Each drawing is done in pen.  Beautifully composed pages full of free and decisive marks illustrate Grimes’ exploration of the sub-conscious. When Grimes initiated this method of drawing, he was interested in the work of Freud and Jung.  He wanted to access the subterranean storehouse of information that the conscious, waking mind is too busy to contend with.  He says: “When I begin a piece, I have no game plan. I begin with automatic drawings and the results are subconscious. The paintings grow. I avoid making things recognizable for as long as I can, but things come out.”

Grimes continues to make these line drawings, and they are used as points of reference in his current work. When reduced in size, a drawing might become an engraved detail. Enlarging one of these Automatic Drawings might create an environment for pieces of subject matter. Chairs and playing cards appear with great regularity in his work, as do certain architectural forms. While it may be tempting to create lengthy analyses of the images in Grimes’ work, the artist says that he feels that a piece has succeeded when a viewer is unable to articulate the aesthetic experience in words. In an artist statement from 2004 he said: “I live in the sea of relativity and avoid verbal submarines.”

Verbal analysis may be risky, but it is important to recognize some thematic tendencies.  Grimes’ treatment of the human figure appears to be simultaneously mythological and intensely personal. A piece from 2009 entitled A Last Look Back illustrates not only the face of Rembrandt, but also Grimes’ life-long admiration for the Baroque master. Horizon Line, a work from the same year, is an unflinching image of the artist that reveals his understanding of Rembrandt’s unique approach to self-portraiture. This approach grants equal representation to both internal reality and external appearances.  Though Robert Grimes uses the sub-conscious to guide his works, they are far from mindless; his daily intellectual and emotional connections make their presence known in the visual elements of his painted sculptures.

Formal education, cultural influences, and the long-standing practice of Automatic Drawing are consistent aspects of Grimes’ work as an artist. The artist’s choice of medium and the shape of his sculpted canvas, however, show ceaseless innovation. His goal has been to discover a sculpting medium and method that can be worked as intuitively as his drawings. Grimes used clay and mold- making processes for many years, but ultimately found them to be cumbersome. He wanted to work more directly. When he started to use wood in the studio, he began with solid pieces of Baltic birch plywood, making bas reliefs which were then painted in an alla prima style. Loving the directness of wood carving but longing for the plasticity of clay, Grimes developed the method that he uses today.

The works in August’s show at the Art Spirit Gallery are constructed from small pieces of wood that are painstakingly wired together. The compositions that result from this joinery method are flexible, allowing Grimes to push and pull the sculpture into the desired form. He has made wood behave like clay. Oil paint, engraving, and textured putty are applied to the wood surfaces during the sculpting process, which makes the works appear to have grown rather than having been made and then decorated. A metamorphosis has occurred.  His simple and effective construction methods are not hidden from the viewer, adding to the theatricality and authenticity of the pieces. This sculpting method, coupled with the abandonment of the conventional rectangular-shaped canvas, allows the pieces to come through the wall into our world.