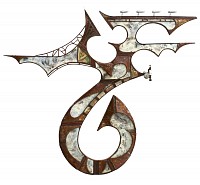 I collect, combine, and unite the materials that pass through my life, trying to expose the meaning of the image floating in and out of my mind’s eye.

I work with the mixed media of the physical world, responding to trees and machines, imagery and text, history and humor, earth and architecture, texture and color, line and shape, and the constant feeling of time passing.  Assembling these materials of life into art creates a unified vision of my response to the mystery of the tangible world.

Viewers encounter these ordinary fragments of life in my work, seeing their reflections in metal or branches, plaster or wires, their memories and imaginations inviting them to discover meaning. They glimpse landscapes and cityscapes, clouds and color, texture and shadow, cracks in pavement, sun through branches, fingers in sand, idea and image, thought and emotion, existence and memory.  Uniting the materials of the world into art mirrors uniting a single work of art with a single viewer.

Life is what we bring to it, and when looking at my work, viewers see both decomposition and persistent creative energy.  Within both views lies visual beauty—it's just a matter of how we experience the pulse of living.  Beauty exists as life begins, ends, transforms, and begins again.   More and more my experience seems to be one of continued movement from one thing to the next.  It is when I slow down and listen to the sound of space and my place in this world that I realize life is right now.

In conceptualizing my work, I embrace all of the blooms and screws, warts and wires. In the persistence of existence I find beauty, humor, and humility.

We don't have the answers; we're just part of the mystery.

My relief sculptures combine a wide range of materials.  These pieces are best described as "constructions" that integrate mechanical materials such as antique machinery parts, glass, and metals, with natural materials such as beeswax, branches, and leather, and with imagery from archival texts.

I begin by drawing and designing a framework, and through welding and woodwork I build the basic armature for my ideas.  Then through a process of discovery, I synthesize a host of materials to bring the piece to life.  I cut and shape, layer and connect, place and paint, and make all pieces and parts live together as a community in their new visual environment.  My palette originates from the inherent colors of the materials I choose, which include painting in layers of pigmented encaustic beeswax to create a deep, textural, and luminous surface.

I am a life-long learner, having attended art schools and universities in Montana, Japan, Seattle, and Idaho, leading to a Master of Fine Arts.  I have worked as an illustrator, painter, and sculptor and have taught illustration, studio art, and art history.  I learn from the intense exchange of ideas in the process of teaching students at North Idaho College, as I engage my own creative thinking, knowledge of art history, and experience with art-making to help students grow as creative people.  My wide-ranging interests include studying art and architecture wherever I travel, and my interest in history sends me on perpetual quests for objects, imagery, and texts that reveal the beauty of age.  While immersed in teaching and learning, I thrive on the process of making abstract and intricate artworks that I have never seen before.

Editorial covers and inside articles: