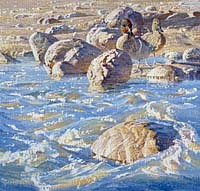 This exhibition is sponsored by Lakeshore Realty & Appraisals. We thank them for their generous support of the arts in our region.

Press Release:
Artist Charles Timothy Prutzer sketched a tiger from the shifting back of an Indian Elephant.  He crawled 50 yards, notepad in hand, to capture Green-winged Teal near a fast-moving stream. Under an old blanket on an African plain, he rendered a Secretary Bird in an Acacia Tree with telescope and watercolor.

Working in watercolor, oil and acrylic Prutzer’s work shows remarkable range. For example, in precise detail, he captures a kestrel in air, its almost-still body bathed in sunlight and its wings hovering.  Working more spontaneously, Prutzer’s watercolor of an African antelope is a simple study in line and contrast. In addition, his impressionistic landscapes, like “Broken Sky, Broken Ground,” emphasize movement and the play of pigment and light.

Prutzer often sketches and paints plein air, from living subjects, not from photographs. He says, “Distant snapshots” don’t contain the spirit or honesty captured in plein air.  His difficult, sometimes dangerous field work allows him to establish an intimacy with his subjects: Pronghorn Antelope, Hooded Merganser, and Golden Eagle.

Describing the challenges of his Bengal Tiger sketch, Prutzer explains, “Even when the elephant stands still, he is constantly adjusting his weight.” In addition, the artist was always keenly aware of the tiger’s “absolute supremacy in its environment.”   On one outing, a tiger charged Prutzer’s young elephant, bursting explosively out of bamboo and forcing his mount to retreat.

At the age of 17, Prutzer began work as a natural history artist at the Denver Museum of Natural History, and he has completed over 30 large-scale wildlife murals for natural history museums, zoos, and nature reserves in U.S. and abroad, including a three-dimensional, 60 by 30 feet Cheetah and Grey Rhebuck diorama in South Africa.

One of only a handful of Americans, Prutzer was invited to participate in field expeditions with the Artists for Nature Foundation, an international organization promoting nature conservation though art. He studied and painted European Crane in Extremadura, Spain and Bengal Tiger at the Bandhavgarh Nature Reserve, India.