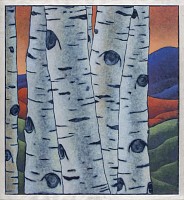 Inspired by the dramatic landscapes encountered in her diverse travels, painter Jerri Lisk never leaves home without her sketchbook in hand. Back in her Idaho studio, Lisk interprets her line drawings into paintings of vibrant color which combine the unique surface of sanded aluminum and a selectively naïve style to skillfully convey the raw, yet seductive, innocence of nature. Her compositions float within a border of aluminum, giving them a three-dimensional feel surrounded by the roughened texture which suggests a separate metal frame. As vibrant and alluring as her medium is original, the paintings of Jerri Lisk leave a lasting impression on all who view them.

Artist Statement:  I was born into a life of paint brushes, pencils and paper. With oceans, mountains and deserts in my veins, I use a rich palette of color; my eye ready to fasten the most impossible blue to a hillside or to find the strongest form to represent the shape of a tree. I studied as a student of painter Frank Holda, and later studied in London at the Leonard Pardon School of Specialty Design where I was taught techniques that whispered fluently the language of texture, material, surface and hue. From my home, I now set out into deserts, up craggy limber pine ridge-tops and down into river canyons, to capture in pen the stark forms of trees, hills and valleys into compositions. Later, I paint their lines, redrawing these simple lines onto the surface of metal, layering each with intense color and depth of light.  While it is neither conceptual nor literal, there is something about the subject of the trees of which I never tire. It seems as though these forms each have a story to tell. I enjoy the one-on-one dimension that working on a large piece gives, as well as the small jewelry like accents of the small simple compositions. The installed painting stands away from the wall, but I hope to take future works towards a series of sculptural forms. –Jerri Lisk